The Ocean at the End of the World – Neil Gaiman 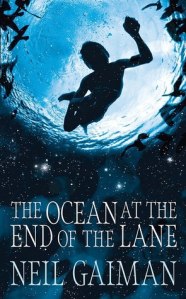 Nobody looks like what they really are on the inside.  You don’t. I don’t. People are much more complicated  than that.

I’m going to tell you something important.  Grown-ups don’t look like grown-ups on the inside either.  Outside, they’re big and thoughtless and they always know what they are doing.  Inside, they look like they always have.  Like they did when they were your age.  The truth is there aren’t any grown-ups.  Not one in the whole wide world.

This book is Neil Gaiman’s first novel for adults in eight years.  Some say it is his best novel yet.  I read and enjoyed the award winning Coraline (see awards for Coraline below), but this is another step up again. Expect to see it winning plenty of awards. It draws on the very best in storytelling, with Gaiman perhaps stating his game plan in the novel itself, when the seven and a half year old version of his narrator says:

In the same way, this story is ostensibly told by a very middle aged ‘handsome George’, who deviates from his journey to a funeral, to revisit where he used to live when he was seven.  His childhood memories begin very much like a 1960’s children’s novel.  He loves his bedroom in the attic, his books and his parents – not so much his little sister.  He has a kitten, and everything is good in his world.  But it all changes rather abruptly, when his parents suffer some financial misfortunes which mean they need to take in boarders.  George has to move bedrooms and share with his sister, which he takes quite philosophically. And then the boarder arrives, unfortunately killing the kitten as he does so.

The shocking lack of empathy the boarder has for the boy’s loss is the first indication that the story is going to become quite dark.  And then, quite suddenly, the boarder dies, which is how our narrator meets Lettie Hempstock, her mother and her grandmother.  Lettie is eleven, but she is also mysteriously ageless.

I thought for a while.  Then I asked, ‘How long have you been eleven for?’

She smiled at me.

When we are introduced to her grandmother , she has, ‘long grey hair, like cobwebs, and a thin face.’  The crone image is very clear, and that there are three of them is very mythical and magical.  The food in their farmhouse is the ultimate in comfort food.  It made me think of Enid Blyton picnics, or the good wholesome food that Colin and Mary are restored to health on, in Frances Hodgson Burnett’s The Secret Garden.  There is something restorative about this food, beyond its nutritional value.

‘Nothing I had drunk had ever tasted like that before: rich and warm and perfectly happy in my mouth.  I remembered that milk after I had forgotten everything else.’

It is lucky that our young narrator has been fortified by the women at the farm, since things go from bad to worse very quickly.  Before we know it, his world is a very, very dark place, where no-one that he knows can be relied upon to protect him, except Lettie, her mother, and her grandmother.

Some of the cruelty that happens is very disturbing, and reminded me of Roald Dahl in his darker (darkest) writing, and the evilness permeates like the evil witch, Queen Jardis, in Narnia.  Beautiful and cold and wicked beyond belief.  The food is in distinct contrast to what the Hempstock’s farmhouse provides, much like the Queen’s hot chocolate and Turkish delight in Narnia.  (In fact, I would not eat Turkish Delight for years, after reading The Lion, The Witch and the Wardrobe!  It still feels like a very naughty dessert, to me.)

Neil Gaiman says, ‘Children are a relatively powerless minority, and, like all oppressed people, they know more about their oppressors than their oppressors know about them.  Information is currency, and information that will allow you to decode the language, motivations and behaviour of the occupying forces, on whom you are uniquely dependent for food, for warmth, for happiness, is the most valuable information of all.’

This story, like many fables, myths or fairy tales (I’m talking Grimm, not Disney, here) is a cautionary tale.  I think it perfectly captures the ideal Gaiman presents in the novel.  This is mythical; it is not an adult story, it is not a children’s story. It is better than that.  It just is.  It explores a child’s view of adults through an adult remembering the child he was.  Gaiman is expert at thrilling his readers with the terrifying, mysterious and strange.  And yet he writes so poetically that you want to read and reread each line as you go.

I think that this is a book that I would not necessarily present at school.  There is a lot of darkness. Josh Roseman puts it well, when he says: Note to Parents: While this book is written from a seven-year-old’s POV, it still contains disturbing imagery, nudity, scenes of child abuse, and discussions of corporal punishment. I’m not sure I can put an age range on this one; just read it first, and then decide if your kids are ready for it. Which, when you get right down to it, is what I always say – Read more at his website.

Read another review of this book here

Tagged as fantasy, Hempstock, Neil Gaiman, The Ocean at the End of the Lane, truth

Writing for Kids (While Raising Them)

To Make a Prairie

A blog about reading, writing, teaching and the joys of a literate life

Blog of the New Zealand Association for Research in Education

Welcome to our Family Research