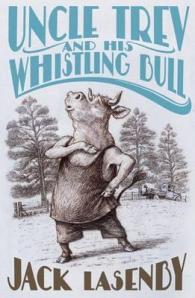 For as long as I can remember, Uncle Trev stories have been around.  Uncle Trev’s a bit of a ratbag.  He’s always getting himself into some kind of trouble or another.  Set in small town New Zealand, in the early 1930’s, the wide-eyed, all believing narrator is a young lad (let’s call him Jack – I’m not sure we ever find out his name), bed-ridden for six weeks.  Uncle Trev pops in now and then, usually just after Mum has gone into town for something.  Mum and Uncle Trev don’t get along so well.  To be fair, Mum’s pretty scary, with ears so sharp she can hear the echoes of conversations, and eyes so sharp she can read the lino like a book.  Young Jack tells Uncle Trev that he’s afraid of the dark, and Uncle Trev replies, ‘Don’t go telling her I said so, but I think the dark’s probably scared of your mother.’ Mum’s also a pretty good baker, and Uncle Trev can’t help himself getting into the cake tins, even knowing Mum’s probably going to find out…

Uncle Trev spins a pretty good yarn, and each chapter in this delightful book is yet another tall tale to entertain both the child listener and the adult reader.  The tales get a little taller and a little more fantastic each chapter, until even very young children can realise that Uncle Trev might just be a little bit lenient with the truth, now and then.  Oh, how wonderful to be wiser than the boy in the book, who believes everything his Uncle Trev tells him.  I can imagine this as a wonderful read-aloud, either in the classroom, or at bedtime each night.  There’s a warm, affectionate and reassuring tone to the stories, that assures children that the adults in their lives care about them very much.  There’s also a nice amount of sheer silliness to have fun with – what a great intro into telling tall stories of your own, about your childhood.  It has the alive feeling of a story told, rather than a story read.  I always imagine a Barry Crump kind of voice for Uncle Trev.

While I really do love this book, and it is extremely entertaining, consistently well-written and just the right mix of sincere, slapstick and a tiny bit scary, for me it reads best as a series of short stories.  I have had children read it, and enjoy it, but I have also had children read a few stories out of it, put it aside and say they will come back to it later.  I think both kinds of readings are fine.

Writing for Kids (While Raising Them)

To Make a Prairie

A blog about reading, writing, teaching and the joys of a literate life

Blog of the New Zealand Association for Research in Education